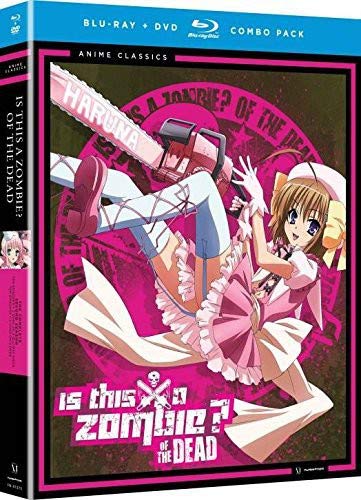 Title: Is This A Zombie of the Dead Blu-ray/DVD Anime Classics

Is This A Zombie? of the Dead collection contains episodes 0-11 of the anime directed by Takaomi Kanasaki.

Ayumu breaks Harunas magic chainsaw and accidentally exposes his fondness for pretty pink dresses to the entire school! Next theres an incident with a dreadful dance that turns out to be a curse - and an embarrassing trip to a maid cafe where all the zombies roommates work! But the shenanigans take a backseat to bigger problems when Ayumus mysterious drinking buddy turns out to be the most powerful magical girl of them all!

To save his friends and defeat this adorable new menace, zombie boy must do the unthinkable: throw a mixer for his own murderer! With a little help from his loyal harem of vampires, magical girls, and the worlds cutest necromancer, Ayumu just might survive to rot another day!