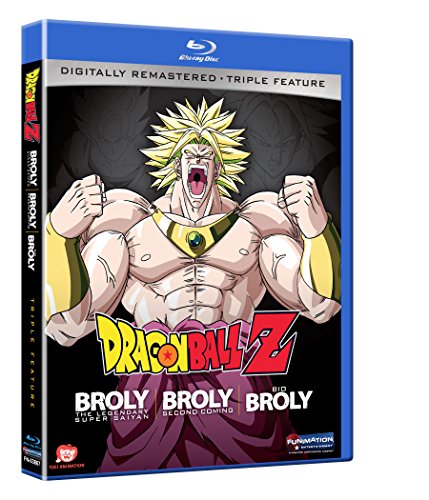 Broly, The Legendary Super Saiyan
A mysterious messenger delivers horrific news: a vicious Super Saiyan is rampaging through space, and he will not stop until the galaxy is left smoldering. Goku and Vegeta rush to confront the menace - but the true danger is much closer than they think. Broly is a force of unspeakable malice, with powers that rage beyond control - and he has the Z fighters in his sights.

Broly, Second Coming
An investigation into the crash of a strange vessel quickly turns into a battle that not even Earths most powerful heroes are guaranteed to win. Broly, one of the greatest threats the universe has ever known, has returned - and this time, Goku might be powerless to stop him. Broly has gone insane from the hatred that boils inside him; an anger that burns hotter than even the pits of the fiery underworld. The entire cosmos will suffer unless the sons of Brolys greatest rival can defeat him - and it will take nothing short of a miracle.

Bio-Broly
Corruption and technology have united to resurrect one of the greatest forces of evil the universe has ever k...