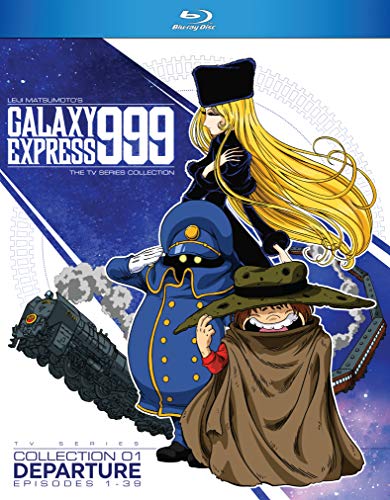 JOURNEY THROUGH A SEA OF STARS FROM THE LEGENDARY LEIJI MATSUMOTO.

All aboard the Galaxy Express! The original galactic adventure REMASTERED

After witnessing the death of his mother and being left for dead at the hands of Count Mecha, ten-year old Tetsuro Hoshino is awakened by a mysterious woman, Maetal. In exchange for only his company, Maetal offers him the ride of his life on the Galaxy Express 999. It is said that those who travel aboard the legendary train to the end of the line can receive a free mechanical body and with it, immortality.

Impoverished and alone, Tetsuro leaps at the opportunity and joins Maetal on a quest that will span the cosmos. As the Galaxy Express 999 makes its way across our solar system and beyond, Tetsuro is drawn deeper into a dangerous universe where peril lurks at every stop. From the pirates of the notorious ship Queen Emeraldes to a planet that travels through dimensions, this is just the start of Tetsuro's epic journey!
Tweet