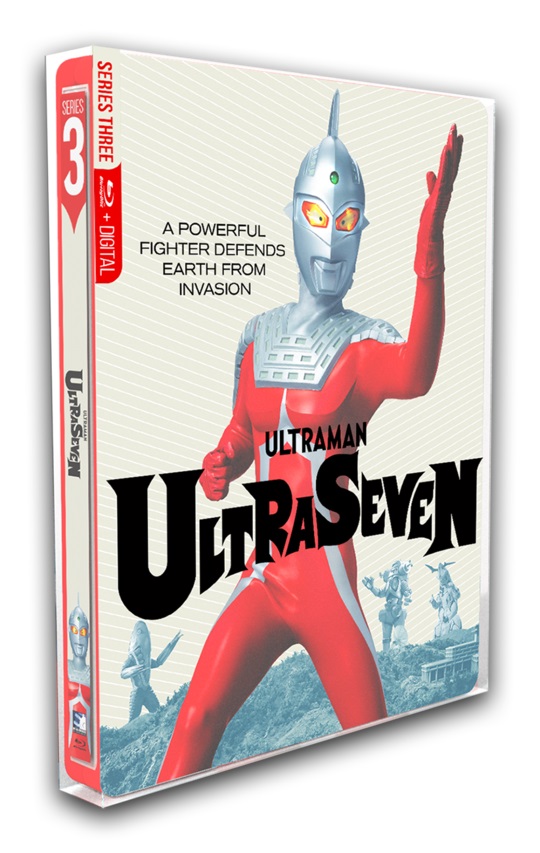 The third in a series of five, Ultraseven contains episodes 1-49 of the live action series directed by Hajime Tsuburaya, Samaji Nonagase, Kazuho Mitsuta, and Toshitsugu Suzuki.

In the Age of Interplanetary Wars, Earth is in danger from those who would threaten its very existence. From their massive underground complex near Mt. Fuji the Ultra Guard, an elite unit of the Terrestrial Defense Force, stands vigilant as our decisive first-line of defense. But unbeknownst to his teammates, Dan Moroboshi is secretly an extraterrestrial aiding them in their fight to preserve the future of humanity. Dubbed Ultraseven, he aides the Ultra Guard in fighting back alien hordes that would doom the world to conquest.

A far greater threat emerges, though, as Ultraseven sees the consequences of his power: can he maintain his soul in the face of constant violence, even when that is necessary to protect his newfound friends?

Produced by the creative team behind ULTRAMAN, ULTRASEVEN is the third entry in the Ultra Series. One of the best of the long-running franchise, its science fiction themes range from the cruelty of war to social and racial injustices in the grand tradition of Star Trek and The Twilight Zone. For the first time in High-Definition, ULTRASEVEN featur...